Peter Aziz describes the various shamanic traditions from which his work has evolved.

An egregoria is an ensemble of forces resulting from the combined wills of several qualified individuals who unite for a common goal. When a tradition is passed down, an egregoria can build up power over hundreds of years, and supports each individual who follows the tradition. Many healing arts have their own egregoria; Reiki healers have their Japanese spirit guides, for example. To know our egregoria, I need to give a brief history of my path. 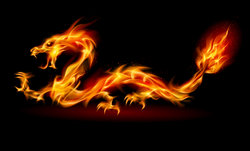 I am from an ancient lineage of Hungarian Shamans which evolved out of Egypt. The Dragon cult of Egypt emigrated to Hungary and formed the Royal Court of Dragons. It was from this lineage that the Pendragon family came to England.

I also studied with Kahunas, and found that they also originated in Egypt, and had some missing pieces of my magick. This Egyptian magick in turn came from Atlantis, from the cult of the Dragon God, Dizan-Lootik. The Atlanteans and the Pendragons both learned from the Faery realm, which I still work with today.

Tracing further back, the first humanoid race came from Sirius, on which there were four root races: The Cat people, the Eagle people, the Crystal people and the Shimmer beings. They brought their magick to Earth and shared it with both human and faery, settling in the faery realm because the faeries were far more ready for their level of magick.

Within our egregoria we now have Sirian, Atlantean, Faery, Egyptian, Hungarian, Celtic and Kahuna ancestors, all linked to a single magick current that is still evolving. This is a considerable power, which is behind everyone who receives its transmissions through our courses.