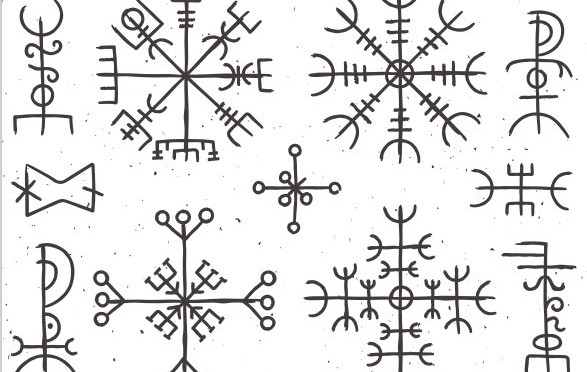 Further to my blog on “Healing with Runes”, I now wish to expand on the magickal use of Runes including bind runes for many other types of magick. It helps to first understand their place in creation.

The Energy of Creation and the Power of 18

The pure preconceptual energy of creation which is undefinable, a-dimensional and limitless, begins to divide into archetypal energies, which bring the pure energy of source through resistances. Resistance is not a bad thing; it is what transforms the pure potential of source into energies that can be used, in the same way that electricity goes through the resistance of a filament to produce light.

These subdivisions of energy always seem to form groups of exact numbers; the first division being 18. This is reflected in the 18 wave functions of the quantum field, the fact that there are a maximum of 18 electrons in each electron shell surrounding an atom, and that there were originally 18 characters in all early magickal languages. Ancient Hebrew had 18 letters before the vowels were later added. The first Egyptian hieroglyphs had 18 letters before more complex sounds were added. And there were originally 18 runes described in the Havamal; the ancient poem which is the earliest written record of rune knowledge. Further runes have since been added, and there are now several rune systems. Although these extra runes are very useful, let’s not forget the earlier Armenian runes (the original 18), so we keep an understanding of the subdivision of creative forces.

A Simple Method for Combining Runes

The last 18 verses of the Havamal are cryptic descriptions of these runes (Refer to my earlier blog “Healing with Runes”). Meditating on these cryptic messages gradually brings an understanding of the archetypal forces of creation. These are the building blocks of all creation. Anything you can conceive of consists of varying combinations of these runes, therefore it is very useful to understand how to combine runes to produce any change you would like.

The simplest method for doing this is to first figure out which rune energies are needed for what you want, by carefully considering the rune poems, and picking out a combination of them that relate to your desire. Next, consider the sounds of the runes, so you can use them as an alphabet to write your intention, but this written intention must contain the runes you picked to fit your intention. It can contain other runes, but only your significant runes will be charged. You charge them by reading the poems and chanting their sounds. It’s normal to carve this runic spell into wood before charging it with chanting and meditation. This is now a talisman, which you can leave somewhere undisturbed to do its work, or carry it with you to affect changes in your life.

The next kind of spell we will consider is the bind rune. To understand the full significance and power of bind runes there are two things to consider:

A rune on the World Crystal

A bind rune for overcoming shyness

Notice how a few runes are combined into one shape. This bind rune was created to overcome shyness. It contains the runes Ur, Raidho, Tyr and Ken. This energy pattern on the causal plane would reshape reality with the desired effect. To charge it, set your intention, breathe the runes and slowly chant their sounds. It also adds power if you form the rune postures with your body as you breathe and chant. This could simply be drawn on paper and carried in a pocket or wallet.

Learn to Create Your Own Bind Runes

I will be talking more on runes this coming weekend. On Saturday, 1 October 2022, I will be giving a free Questions & Answers call on Nordic Runes and on Sunday there will be a Q&A on ‘Using Runes to Access the Shining Ones’ for my Magick Students. Also on Saturday, my Magickal Membership workshop will be on creating bindrunes. I will give a number of ready-made talismans for various purposes, and help participants create their own spells according to their needs.

You can join the Magickal Membership anytime or purchase the Creating Runic Spells workshop separately until the live workshop airs, after which it will be accessible only to members at a discounted price.