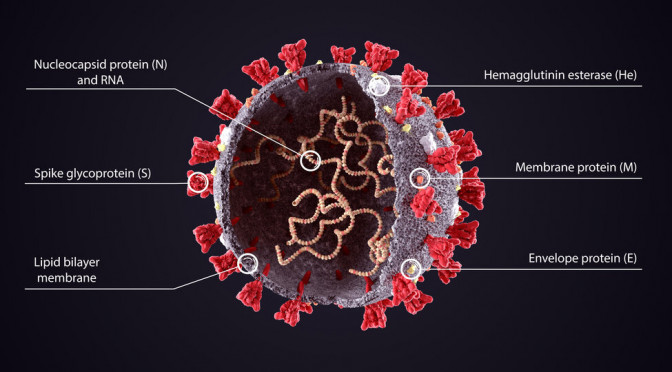 A little recap: The spike protein surrounding the covid-19 virus is what causes inflammation. It’s the spike protein that has been isolated in the vaccine, and by using mRNA to alter the genes, the vaccinated produce these spike proteins in their own bodies, causing continuous inflammation, particularly in the blood vessels. It also affects the heart, causing myocarditis, which slowly destroys heart tissue. This ultimately leads to the need for a heart transplant.

It is obvious that with the number of people being vaccinated, there won’t be enough hearts to save them all. An added problem is that since they continuously produce the spike protein, they are infecting others. It is released on the breath, through the skin, and through bodily fluids. Furthermore, the mRNA is also spread in this way, which means that all those contaminated by the vaccinated will also start producing the spike protein and will suffer the same fate. This contamination is far worse than any virus; it causes inflammation, pain, and ultimately kills.

Remedies for the Spike Protein

OK, so let’s start looking at some solutions, starting with the spike protein. As usual, nature provides the remedy to the abuse of our body.

There are 3 substances I know of that counter the spike proteins: hesperidin, quercetin and shikimate. Hesperidin is a bioflavanoid found in citrus fruits, buckwheat and peppermint.

Quercetin can be taken in supplement form. Here’s a list of foods/herbs that are high in shikimate:

The ayurvedic combination known as Triphala.

Additional remedies are recommended by David Avocado Wolfe in his Shop – his full protocol is on his Telegram channel.

Taking any combination of these will deactivate the spike proteins and heal the inflammation. However, once the DNA has been altered to keep producing spike proteins, you would have to keep taking them for the rest of your life. So let’s look at the next problem: gene manipulation.

Once genes have been altered, they will reproduce cells with the same gene-alteration, so healing generally does not work. None of the normal healing modalities or herbs will reverse this damage. Even modern technology, such as Rife frequencies and the more advanced med-beds you may have heard of, cannot help the vaccinated, as it will only repair the new DNA pattern, i.e. renew the problem. There is one remedy I found in the ancient Vedas: The Shree Yantra. I have previously written a blog on this. One would normally have to spend a lot of time to gain its Siddhi (spiritual power) before you could repair DNA with it, but I have done that for you.

My Shree Yantra empowerment will enable you to repair your DNA by meditating with it. You would have to do it again every time you get contaminated again. A simpler way of using it would be to set it on a psionic plate. I include the Shree Yantra in my psionics course, so you can just set it in the trend box and leave it running permanently to keep your DNA intact. The Shree Yantra represents the energy pattern of our divine blueprint. It contains the information our body needs to repair itself.

Another complication is that the vaccine also contains the Fanvax which was created to “cure” religious fanaticism and which shuts down the pineal gland and parts of the brain associated with religious experience. When one is so shut down, having no connection to God, one is more easily controlled, loses hope, and will also lose the ability to correct it through psionics. To account for this, my psionic courses include a Higher Self Connection Disc attunement. This is also given free in the replay of my Q&A on 11th April 2020. It is given freely so anyone can reclaim their right to spiritual connection.

I also give a free Pachamama attunement on my Q&A 30 May 2020 replay to restore one’s connection to the Earth. For further work on unblocking your spiritual power, I offer the Pranic Activation, which is two hours of shaktipath to clear your channels, and the 72000 Nadis Activation. These will clear any spiritual blocks.

Now let’s look at the biggest problem: nanotechnology. Machines can be made the size of molecules by controlling the arrangement of specific atoms. Building Artificial Intelligence within the genes requires mRNA (messenger RNA) to transfer information to living organisms. It is easy to make these machines self-replicating.

The instructions that the ribosome follows in building a protein are provided by mRNA (messenger RNA). This is a polymer formed from the four bases adenine, cytosine, guanine, and uracil. A sequence of several hundred to a few thousand such bases codes for a specific protein. The ribosome “reads” this “control tape” sequentially, and acts on the directions it provides.

The assembler requires a detailed sequence of control signals, just as the ribosome requires mRNA to control its actions. Such detailed control signals can be provided by a computer. In other words, the technology is already here to have machines—both on the nano level and macro level—self-replicating.

The purpose of AI is to far outreach human capability. Nanobots used on the body will change it at a much faster rate than nature. This opens up vast possibilities in technology, but it means that once it is doing damage, it will do so faster than nature can repair it.

So far, the energy medicine modalities used to repair DNA are not complex enough to neutralise these nanobots. They tend to use specific frequencies, but this is extremely crude compared to the complexity of nanotechnology. However, there is a remedy scientists tend to overlook as it is too mystical: psionics. Basically, the brain can generate far more complex energy patterns than a machine. Psionics is a way of triggering our innate mind power.

Although the signals generated by the brain and nervous system during psionic operations is subtle, it is actually more effective than machine-generated electric frequencies, simply because it is a signal of pure life force, or chi, rather than crude electricity. This is the energy living organisms function on, and can only be generated by living organisms.

Once the energy pattern of an organism is found, and another pattern produced to neutralise it, that organism begins to die. An example of this is the use of radionics in agriculture, where a signal is sent to a particular location to wipe out a particular pest, and that pest is destroyed without harming the bees or any other useful creature. The same can be applied to the nanobots that are wreaking havoc within the body. It will require a far more complex energy than is usually generated by simple number sequences in psionics.

What I am using is an adaptation of something I learned very early in my psionics career, called magneto-geometric potency preparation. The energy of a disease could be dowsed as a pattern, a neutralising pattern could then be created, and when transmitted, would eradicate the disease. This is what I am doing with the vaccine nanobots. I have created a special psionic plate that anyone can use to overcome all the damage done by vaccination or shedding. It is called the DNA Guard and is available at a greatly subsidised price. I recommend everyone to start familiarizing themselves with psionics. My psionics course is very easy to use, and very powerful. You can start using the Shree Yantra to repair your DNA and build health.

I have created a talisman to help protect against vaccine damage and shedding of spike proteins. You can wear it, keep it near you or use it on my psionic plate (free download). it is made to build resistance against all the negative elements of the vaccine. N.B. The DNA Guard is much more complete as it will actually deactivate the spike proteins and nanotechnology.

A healing orb has been created for you by my partner to help protect you against spike proteins. This orb is in the ethers, you can call it in and it is activated by the symbol below. Having said that, the command on this orb is to work with anyone who asks for help. They do not need to have knowledge of this orb, they just need to ask for help against the spike proteins and it will be with them. It was primarily created to protect from shedding so that’s the replicated spike proteins that the body has created after the jab that are affecting others. It should lend protection from the ‘virus’ itself, but the problem with the jab is that an individual has accepted that into them, created a contract, so unless they have done work to change what they are creating it can’t give much relief.

To summarize, a good protocol to protect your health and your life, is to use the herbs listed above, use the Shree Yantra to repair DNA, use the free resources (talisman and healing orb), take the free attunements of Higher Self Connection Disc and Pachamama to restore your spiritual connection, and possibly the Pranic Activation and 72000 Nadis Activation, and start using psionics to neutralise nanobots and any other unwanted influences you may come across.

5 thoughts on “Solutions for S-Proteins and Removing Nanotechnology”