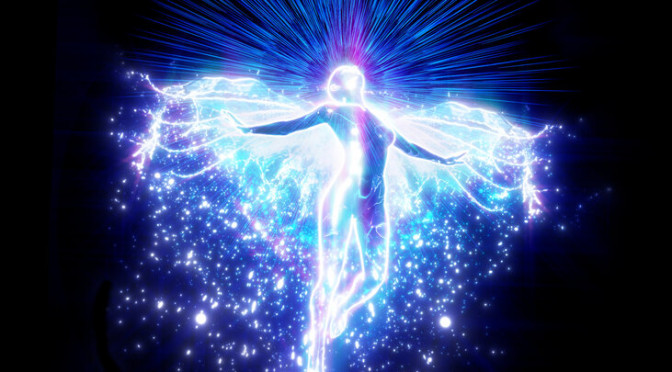 The Levels of Creation

In order to describe the hierarchy of spirits and magickal helpers without being limited to one system, I first want to explain the levels of creation. The source is indefinable and adimensional. All that is beyond our ability to conceptualise we simply call the pre-conceptual. When this pure energy of source creates resistance, it forms 50 archetypal energies. Resistance is not negative; it’s what changes energy into another form, such as when electricity goes through a filament to produce light. Just as electricity is used to produce light, heat, sound etc, the 50 archetypal energies are more specific, whereas the pure energy of source is undefined potential. At this level, these archetypal energies are still pre-conceptual, but to give you a sense of them, the major arcana of the Tarot are attempts to conceptualise them. These cards are not seen as actual beings, but are attempting to show the nature of these archetypes.

From the preconceptual we come down to the prestructural. Deities are beginning to have more definition, but do not yet have form. Here you see common archetypes that are behind the deities of various religions. As these energies go through further levels of resistance, we have the imaginal realm, which is a realm of wild, unharnessed creativity, from which everything is created. The next level gives rise to function, which then gives rise to form. Our form has been decided by our function. Function is the level of the ethers; the elements. Our world, and all parallel worlds, have come through the ethers. According to the differences in function, beings of these parallel worlds have slightly different forms.

Each of these worlds will have its hierarchy of spirits, as each has its own underworld and upperworld.

In the human world, our helpers from the underworld are ancestors and animal spirits. These are often our first source of guidance and protection. All ancient traditions had rituals to feed and honour our ancestors. Modern religions tend to replace these with the ancestors of the religion, i.e. the saints. Ancestors generally look after us when we feed them, and can affect fate to avoid problems and help us towards our goals. Animal spirits are linked to our survival instincts, so tend to keep us away from danger and give us greater resistance against astral entities.

We also have helpers within our own world to help us make the first step: Tree spirits. These are the guardians of the threshold. They help open doors for us to higher worlds, and are intelligent and compassionate enough to only guide us to what is helpful to us, while protecting against harmful spirits. They are traditionally taken in wands, as they also help with all magick by improving our spiritual connections. There is an old tradition of cutting wands in a sacred way so that the spirit comes with you. You can read more about this in my book “Working with Tree Spirits in Shamanic Healing”.

Crystals are also magickal helpers within our own realm. They are multi-dimensional consciousness that can amplify, focus and direct our intentions. Treating them as conscious beings rather than inanimate objects really opens up their potential for magick. You can learn to work with them magickally through my Crystal Magick course.

Our upper world is where we meet our ascended masters, and then the various conceptualisations of the archetypes by our various religions. The best known forms of these are the angels. The various angels are reflections of the archetypes. For example, the archetype of death manifests as the angel Azrael; the lovers would manifest as Anael. These angels are universal powers rather than personal helpers. The personal forms of angels are called khodams. These can be bound directly to you to give protection and to enhance your spiritual growth.

Our most magickal helpers come from parallel worlds in which the beings have developed their magick to a much higher level than we have; the faerie and djinn realms. Whereas we have developed technology and the rational mind, these beings have put all their focus into magick. So let’s look at their hierarchies.

Djinn are great magickal helpers in themselves. Their relationship to the future is different from ours. They step into the future they want, then work backwards to find the path to that future from here. This makes them very good at helping you manifest your goals. They are easy to work with and loyal when you build a relationship with them, and actually will give you a stone that links you to them so you can call them any time. They are not really trapped in the stone, or inside a lamp, which is another traditional way of linking to them, but these objects are a constant link so that you can call upon them instantly any time. They continue to have their lives in their own world.

In their underworld, we have the Ghul djinn. Their bindings are a bit different, as they are happy to leave the underworld to come and live with you, so they will actually live inside an object. They are masters over spirits of the dead and the lower astral, so are fantastic for protection. They can move ghosts on, and hunt vampires and hungry ghosts, and the various “empties” that can drain your life force, as well as deflect curses.

Their upper world contains a higher form of djinn called Muwakkil. These are the angels and demons of the djinn realm. Demons aren’t necessarily evil. The word just means an astral being with wisdom. There are the Nur Muwakkil, made of light, and the Naari Muwakkil, made of black flame. Both these have very strong magickal powers. The difference is that Nur Muwakkil are most interested in spiritual evolution, and Naari Muwakkil are interested in power and fulfilment of desires. For balance, we need both. Nur Muwakkil will surround you in light, awaken you spiritually and help you stick to your path. Naari Muwakkil can increase your personal power and wealth, your sexual power and magnetism, and give you control over people. They will also help you defeat enemies.

The higher level of these are known as Devils. Each Devil rules a world. The devil that overlooks our world and all its demons is Iblis. He gives power over all the demons. Other Devils can also be linked to for extra power. Then the highest level of these are the Dragons. We link to all these beings in the Advanced Djinn Magick course to build magickal power to absolute maximum. Dragons we deal with separately in the Dragon Magick course. Plus there are a number of individual Dragons that can be bound to you for empowerment and protection.

The faerie realm has a different hierarchy again. Although all faeries are aware of magick, some decide to follow the path more completely. In their world, there are places where the underworld and upperworld overlap. As their relationship to space is more flexible than ours, they move these places to the edges of their world, so as not to disturb those who are not following the path. These become the cities of initiation.

The underworld beings will be the ancestors of the magickal lineages, as this becomes far more powerful than personal ancestry. These ancient magicians are known as the Ancient Ones. As the worlds overlap, they also exist in the faeries’ middle world, so appear as ancient magicians that can be thousands of years old.

In the upper world, the archetypal powers are known as the Shining Ones. The best known of these are the Tuatha du Danan; the children of Danu. These are faeries who have ascended to meet the preconceptual energies descending from Source, becoming one with them, but with full memory of their journey through the lower realms. These can be considered to be the most enlightened beings in all the realms. They are great initiators into magick, but can also be invited to co-create with you, to make your magick far more effective.

Apart from underworld and upperworld, the faeries also have other boundary dwellers that exist in spaces in between. There are the Muses and the Glamours. These are all part of the faeries journey of initiation.

Unlike djinn, faeries will not be bound to objects. We need to connect with them in their world to build a relationship with them. This is well worth the effort, as it is a very expansive journey that will take you to a deep magickal understanding, clear away many limits, and significantly advance you on the path of magick. Be aware though, that the crossing to the faerie realm takes us through the ethers, where you can find all your projections.

The little gossamer winged creatures of faerie tale books, imaginative ideas such as the Seelie which go around doing good, are all projections; they are not real. This is where many people get lost. Although you may find some energy in these forms, it is nowhere near as strong as the real magick that can be found in the faerie realm. Also, faeries, being shapeshifters, may take on these forms to entertain, but it is best to not get involved with these forms and stay on track with the real faerie magick.

I have three courses that guide you gradually through these faerie magicks: Faerie Magick, Faerie Initiations and the Shining Ones.

There are two courses of djinn magick; Djinn Magick course, which gives you basic initiation to start working with djinn, then Advanced Djinn Magick, which has 98 extra initiations to take you through mastery of djinn, demons, devils and dragons. Djinn and dragons can  also be bound to objects for you.

I have various empowerments and three courses working with Dragon Magick and also a Crystal Magick course. Tree spirits can be provided as beads or wands.

Join me on Saturday, 3 December at 10am UK on my free Questions & Answers Zoom call where I will exploring Magickal Helpers further and answering your questions.