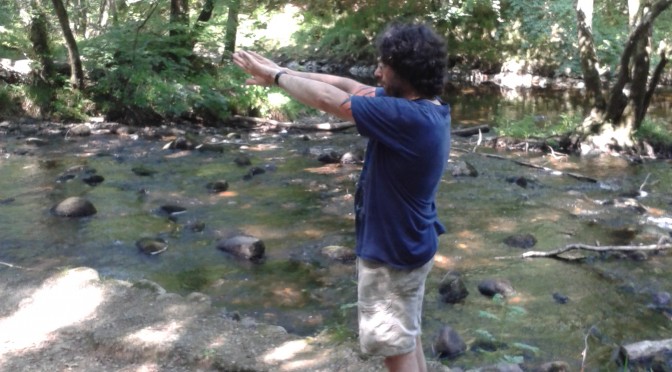 The Norse Runes are very powerful and versatile tools. Being the building blocks of creation, they can be used in any type of magick. Here we discuss how they are used in healing. This just touches upon the healing we practice on my Tethatu Shamanic Healing Course.

Rune means whisper or secret. It refers to mysterious powers, given by Odin, as he hung for nine days on the World Tree. The secret powers of the runes are recorded in the Havamal, which is a cryptic poem describing the essence of the Runes. Meditating on this poem is what reveals to one a deep understanding of the subtle powers. So let’s take a look at the poem first:

They offered me neither bread nor wine
So I bent down in search.
I recognized the Runes; wailing I grasped them.
Until I sank down from the tree.

Now I began to increase, to be wise,
To grow and to feel well.
From the word, word grew after word
And deed shaped to deeds with deeds.

Now I know the songs like no wise one knows
And none of the children of men.
And should these songs, o human child, be unlearnable to you for sheer endless time;
Grasp them as you get hold of them, use them as you hear of them.
Hail you if you retain them.

F A
I know the Songs that no wise woman knows
And none of the children of men.
The first Song is HELP, and help it will
Against sorrow, hurt, and any distress.

U R
A second I know; quite useful to the children of men
Who practice the healing hand:
It chases disease and all pain,
It cures hurts and all wounds.

T H O R N
A third Song I know:  If urgency tells me
To tie the opponent with magic
Then I dull the steel of my foes
So that their swords will not cut anymore.

O S
A fourth Song I know:  If an enemy puts
A tie of pliable limbs;
Then I speak the spell, the shackles break on the feet
And the fetters break on the hands.

RAIDHO
This I know as a fifth:  If in hostile flight
An arrow shoots into the crowd;
Not matter how it threatens, I block its force
By grasping it tightly with the look of my eyes.

KEN
A sixth one is mine:  Should a warrior hurt me
With the roots of soft wood;
This warrior who awakens the hate within me
Shall be struck before it gets me.

H A G A L
A seventh I know:  If the hall blazes high in flames
Above all the people;
No matter how it burns, I still save them all.
The Magic I know to perform.

N O D
An eighth one is mine:  quite useful to hear
For all the people in danger and need.
Where hate should arise between man and man
I settle it fast.

I S
A ninth one I know:  danger is out in the sea
To protect my dear ship
I conjure the wind on the billowing floods
An I sing into slumber the sea.

A R
A tenth one I know: When ill wishing spirits
Fly high in the air; I cause them to turn around
Back to their homes, deprived of their covers;
Back to their roots, bewildered their minds.

S I G
This I know as eleventh:  Then I Lead
Into battle the friend, the beloved;
I sing it into his shield, so he will win in battle
And luck around him everywhere.

T Y R
A twelfth one I know:  If I see the hanged man
On the tree, shaking in the wind
Then I scratch and I stain Runes
The warrior can talk and descends from the tree.

BERK
A thirteenth I name:  If I wet the Son
With holy water
When he is facing the foes he cannot perish
And no blade can strike him into the dust.

L AUG
A fourteenth I sing to all the assembled people
When I name the Divine names;
For nobody knows the characters of Albs
And of all Asir as well as I do.

M A N
A fifteenth I count:  That which Volkrast, the gnome
Sang by the gates of the day;
To strength for the Asir, and to force for the Albs,
And to clear my own senses.

Y R
A sixteenth I know:
If from wise maiden I desire joy of love
Then I change the intent of the maiden
And I turn her feeling around.

E H
A seventeenth I know:
To join together two lives
In love through wise law;
Both are willing, and no one will lightly part after this.

G I B O R
An eighteenth I learned, but I would not let this
Know a just anyone else; for the best Everyone keeps for himself.
That which leads to the end of the songs.
The one only knows who is in my arms as my only lover.

The first stage of Runic development is to learn the postures. These postures happen to match the positions used for kinesiology muscle tests, particularly the common tests for the 14 meridians, which happen to tie in with the runes. These muscle tests give us a way of diagnosing not only the health of each organ or meridian, but also the integrity of each runic energy within the patient, which will give us understanding of the deeper causes of their problems. The runes can then be applied to bring complete healing on all levels.

Not all runes are linked to meridians, but we will indicate which meridian where appropriate.

I give empowerments to the runic energies at the beginning of practice, to ensure the power flows well in all students.

The Runes are formed as body postures, illustrated below.  As you slowly move through the postures in a way similar to Tai Chi, the powers develop, and you feel them flowing through your body. Meditation on each rune, and its corresponding verse in the Rune Song, develops deep insight into its nature, how it interacts with the human being, and how to resolve spiritual, mental and emotional issues with it. The above descriptions are a good start, and will allow you to heal many of the problems that afflict mankind, but deeper knowledge comes with experience. There is a whole form that is practiced, going through all 18 Runes, but you can also meditate on one Rune at a time by practicing its posture. Once you have practiced the postures and felt the energies, it is easy to call up those energies at will, whenever you wish to heal or perform magick.

In the video below, I demonstrate the rune posture sequence. 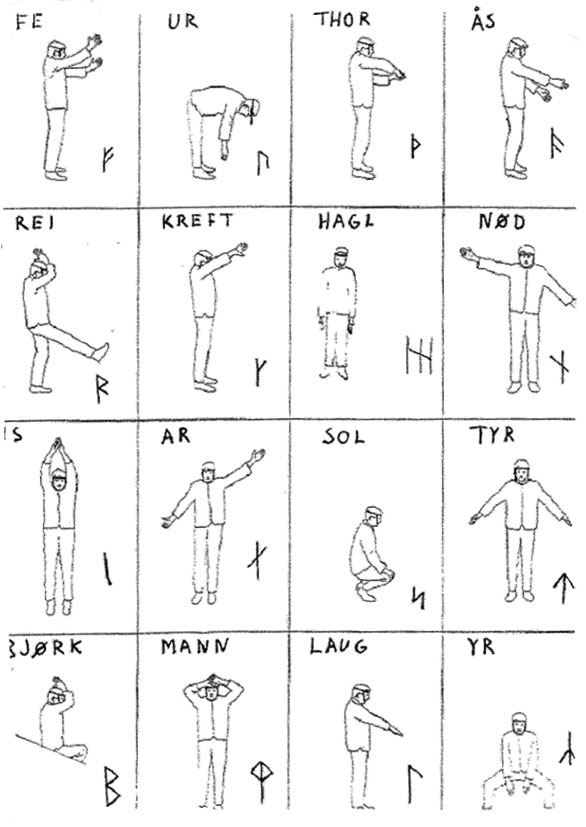 If you would like to be initiated into the runic powers and receive the empowerments, as well as master these healing methods, full training is given on my Tethatu Shamanic Healing Course, beginning 14th – 15th September, 2019. Find out more  here.

4 thoughts on “Healing Through the Runes”