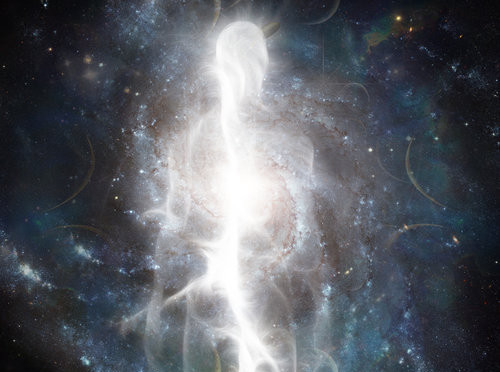 The Descent from Source

So, what are djinn? To understand that, we need to consider the whole process of descent from source. At first, there was nothing but pure awareness; undefinable, adimensional. This awareness creates the Universe with a thought. It then enters its creation to experience it. Awareness within time and space becomes consciousness. The pre awareness has now spread itself into many consciousnesses to experience all of time and space. Our path of spiritual empowerment is a process of awakening to the memory that we are that original pure awareness, which can create anything. However, the jump from where we are to this full realization is not done in one step. Our consciousness couldn’t handle it. So we begin to reverse the process of forgetting power, step by step.

As we became identified with a limited human form, we left the power of creation outside ourselves. This is when the Gods were created. So when we remember the real nature of our relationship with the Gods, we see them as powerful aspects of ourselves that we have separated from. As we forget this, our relationships with Gods can become dysfunctional.

What we call gods can have many levels of power, as our identification with our present human limitation happened in many steps. So we see different levels of power becoming separated from ourselves.

As we attempt to gain mastery over our reality, it is necessary to regain all this power we left outside ourselves, one way or another. We may go into long meditation to ascend back to our God state, but this involves leaving the human life behind. Some of us see this as pointless, as it takes away all reason for becoming human in the first place. The way the sorcerer sees it, is to realize our God-like power while being human, by learning to co-create with all the higher aspects of consciousness. This begins with djinn. 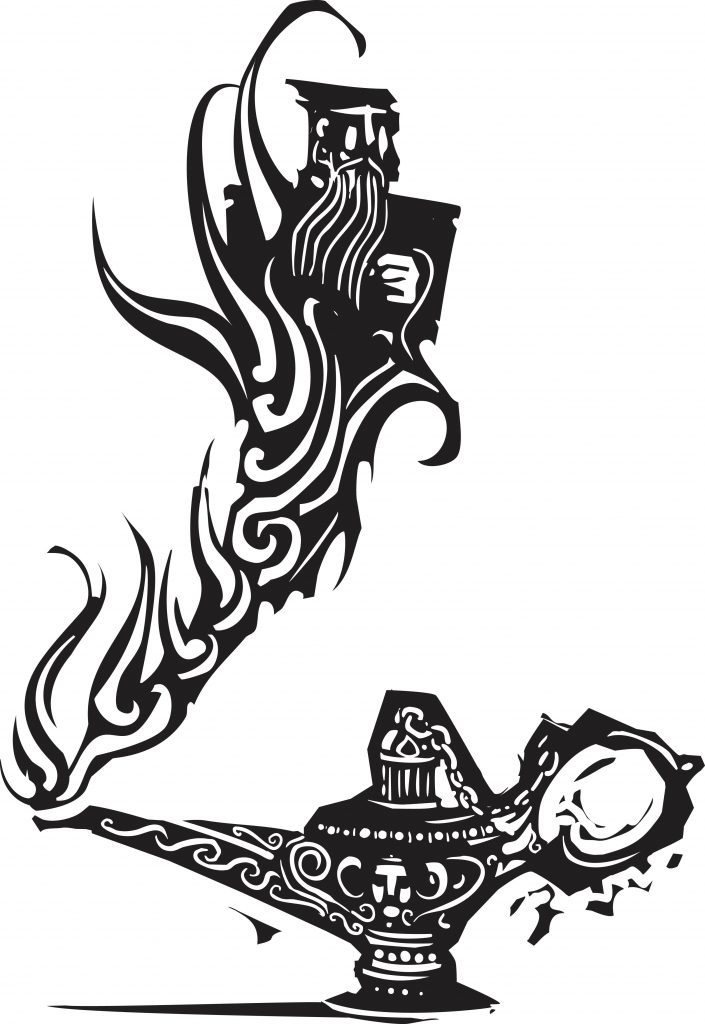 Djinn can be seen as the magickal power we forgot when we became human. There is a hierarchy: djinn do their magick within the bounds of the earth. Above them you have the demons and angels that affect reality on a larger scale, and above that, what were called the Devils. These are not evil, just materialistic. One devil rules over each world. The devil overlooking the Earth is called Iblis.

As the astral plane is much vaster than the physical world, as this is simply where some of the possibilities manifest, there are far more djinn than humans. As these djinn hold all the magickal power that shapes our world, each person can have many djinn.

The older forms of magick often involved asking various spirits to intervene in your life, or equally often, not to intervene. Spirits were appeased so they wouldn’t cause problems.

Working with your Djinn

As our consciousness grows more complex, and we realize that we are the creators, our relationship with spirits evolves into one of co-creation. This is not about asking someone to give you what you want, but about creating something together because you share a vision. The djinn you build a relationship with will be well attuned to your purpose, so will make perfect co-creators. Out of the many djinn you gain, there will be specialists in money, love, protection and anything else you will need, but more than helping with these basics, they will remind you of your True Will; what you are on this earth for. So you awaken and fulfil your destiny, reaching a higher purpose in being on Earth.

To co-create with djinn, imagine what it’s like having a friend share your goal and visualise it with you, and they have nothing else to do accept carry on visualising your goal all the time until it manifests. Then suppose you have friends who are good at manifesting different things; one at manifesting money, one at manifesting love, one at manifesting opportunities etc. Co-creating with them would produce much faster success. Once you have got past the need to perform complex rituals, working with djinn becomes as easy as that. You just tell them what you want, visualise it, while allowing your djinn to join you in the process, then leave them to do the rest. You can use djinn for manifestation, mind control, binding or destroying enemies, or anything you can think of.

Traditional djinn invocations were long and required a lot of discipline. With practice, as your relationship builds, it gets easier, and you can call upon djinn much faster. Luckily, power can be passed down through initiation, so you don’t have to do as much hard work. There are many initiations passed down from different djinn sorcerers. Each one gives you access to different powers. I have just begun to make these initiations available, through on-line djinn magick courses. With these I pass on over a hundred initiations that I have gained over a lifetime. These now bring this powerful magick into anyone’s reach.