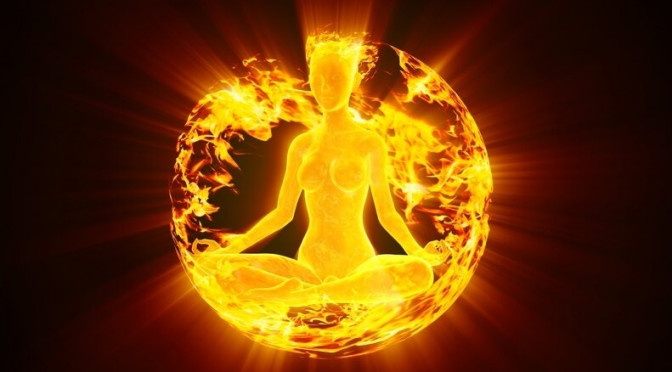 Candali, also known as Gtummo in Tibetan, is generally described as Tibetan Heat Yoga. In Tibet, monks demonstrate their mastery by drying wet clothes on their bodies while sitting in the snow. This is the kind of image the mention of Gtummo conjures up, but there is far more to it.

It’s basically a method of raising kundalini to a very advanced level, but in well-controlled and safe stages. This is where it differs from kundalini yoga. We often hear examples of people being damaged by kundalini experiences, sometimes permanently so. The yogic practices that awaken the kundalini can suddenly raise it at any time, uncontrolled. A person may not be ready for this experience. This is why it is so refreshing to find a system that raises it in safe stages, while awakening all the spiritual gifts we seek.

Why does one want to raise kundalini? There can be a number of reasons, which reflect in the different systems of Candali that exist. Initially, the monks in Tibet and Nepal needed to develop their occult powers in order to survive the persecution they were under. These early systems developed such powers as invulnerability, mind control, and even being able to kill an opponent with energy alone. This aspect was left out in a Chinese form of Gtummo which was used entirely for healing. This method uses symbols to activate different healing powers, and increases the power in stages. This is a bit like reiki. In fact you may have seen reference to Gtummo in the higher levels of reiki, when it adds symbols to activate kundalini, Though Gtummo was considered a lot more advanced. It was said to be 1000 times more powerful than reiki.

Then there is the Indian system known as Sattya Gtummo, which works along with yogic ideals to develop the Siddhi’s, or occult powers. The original ideals were to develop powers such as levitation, becoming big or small, mind control, teleportation etc, but more practically, it is being used to develop clairvoyance, astral projection, healing, magickal protection, creating love, attracting wealth, weakening or paralysing opponents, connecting with masters, and general spiritual development.

Then there is also an Indonesian system known as Gtummo Api Illahi (sacred fire Gtummo) which is more suited to the development of Indonesian magick. Magickal practitioners there use it to increase their magickal powers, invulnerability, martial arts skills such as the power punch, and give high level protection and the strength to defeat other magicians.

I trained in all these, though my main usage of this has been in healing. They are easily combined, as they follow the same structure; i.e. there are 4 levels to take you to vajra master, increasing power safely at each step. Beyond that, some students may be invited to take secret levels, of which there are another 4, which activate deeper powers and fully activate the kundalini.

The Synergy of Candali and Ultimate Healing

So, why am I offering all these levels openly? Basically because I combine it with my Ultimate Healing work which guides people through growth more efficiently than anything else ever has. You see, the raising of kundalini to reach enlightenment involves releasing many energetic blocks, stored emotions, beliefs and conditioning along the way. It’s people’s inability to process all this change that causes problems. When people work intensely on these courses, learning to move through all these blocks quickly and efficiently, they become ready for the next level much faster. I also find that adding candali has greatly improved the healing course, as it brings out and resolves suppressed trauma far more efficiently.

The Body Electronics point holding used in the Ultimate Healing depends on the kundalini. Points would get hot, parts of the body would start burning, and there would be powerful emotional release, followed by physical regeneration. The limitation was that the kundalini was unpredictable. Using Candali, kundalini rises more consistently, along with the powerful healing and transformation. What’s more, it can be done from a distance, so people can experience it at home without having to travel. This has enabled me to give online courses, where you can experience powerful healing at home.

Normally a person would be left to practise each level for a month or two before going on to the next, but I found through experience that by guiding people through the transformation during these intensive healing courses, they can be ready for the next level in a day or two. This way a person may get right to the highest level in a three week course, fully integrating the spiritual power and understanding that comes with it. Outside the Ultimate Healing course, one needs to take them much more slowly, and I need to monitor them to see when they are ready for the higher secret levels.

Let’s look at the structure of how Candali is passed on. Each activation can take 30 minutes to an hour to activate your kundalini and clear the pathways, then you receive a mudra and mantra to practise, which is linked to the presiding Deva of each level. With the first level, the Deva is Baglamukhi, the paralyser, who stops things short. In this case the idea is to stop disease from entering the body. The second level Deva is Kali, and you receive her shield, which protects against any occult attacks or entities. The third level Deva is Tara, who is more compassionate, so the powers given here are for preventing disasters, healing, calming crowds, and gentle forms of mind control to produce positive effects. Later levels include powers of weakening, paralysing, controlling as well as spiritual gifts such as clairvoyance, communication with masters and greater power to manifest one’s desires.

I wish to point out here that although in the set systems one can pass attunements to others once they have level 4, as these attunements involve diksha to the various Devas, one should really have developed that connection through many years of practice. I myself completed long Sadhanas to all these deities, and have done daily pujas for many years, so when I give attunements I can pass on diksha properly. I am not keen on the idea of rushing through levels so you can start teaching. This is a path to be taken seriously. It’s best to practise Candali for your own benefit, long before you think about passing it on.

The Different Levels of Candali

Here is what happens at each level:

Level 1: the first tan tien point, below the navel is activated, the kundalini awakened partially, the sushumna channel opened to 5cm wide, and the Baglamukhi body protector installed.

Level 2: The second tan tien at the heart is activated, the kundalini raised further, and the sushumna channel opened to 108 mm. The Kali shield is given.

Level 3:. The third tan tien at the third eye is activated, the sushumna channel opened to the width of the head, and the kundalini safely risen to the top of the head. Attunement to Tara is included, to keep the experience positive and beneficial. At this level you are given mantras to clear epidemics, prevent disasters, control minds and also mantras for each chakra to develop the Siddhi’s.

Level 4: You are connected to the Vajra masters, the Brahma Gate is fully opened, allowing the kundalini to fully rise. A number of mantras, mudras and words of power are given at this level, for creating love, mind control, striking down enemies, dispelling negative thoughts, various types of healing and speeding up of spiritual development.

Level 5: White Mahakala: This level doesn’t increase the heat, but is specifically for protecting and maintaining wealth. The channels are fully opened to receive abundance. Attunement to White Mahakala protects your money against loss.

Level 6: Laughing Buddha: This level is to bring in full unconditional love and enthusiasm, to maintain the most positive emotional state to make it easy to release all past traumas and beliefs.

Level 7: Zhug: Zhug means Dragon. This is a very powerful level for increasing the kundalini, protection, and particularly power of transmutation. Any negativity is easily released at this level; both negative energies and negative situations in one’s life.

Level 8: Vajrayogini: This brings the full raising of kundalini. This is the level to carry on practising to transmute all negativity and grow towards enlightenment.

Pathways to Empowerment and Healing

So whether you are looking to rise quickly through the levels of Candali attunement or are interested in getting to the roots of what is stopping you from healing at a physical, emotional, mental and spiritual level, you could do well to check out my Ultimate Healing Course. The Live Webinar Series which accompanies Ultimate Healing Part 1 – Self Healing is starting on 28 January, 2023.

I am offering a free webinar ‘Introduction to Ultimate Healing’ on Saturday, 21 January in which I will also be talking about the Candali attunements included in it. I’ll also be offering a free psionics detox program to all attendees. Find out more and register now for the webinar using the button below.