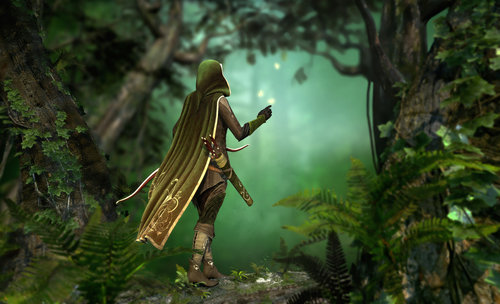 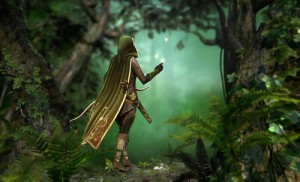 Before explaining the place of faeries in the cosmic scheme, I wish to clear up some popular misconceptions, which are largely propagated by fairy tale books.

Chauvinism ravages the perception of faerie. Singular authority makes us think we are the ruling authority, so faeries are seen as diminutive people. They are NOT little people; they are about the same size as us. In early faerie myths, they were very magickal beings. Reducing them to small beings in children’s books was a way of taking the power away from ancient traditions.

They are not nature spirits. Many people who describe faeries are actually describing elementals.

Many view faeries as a psychological complex. Although such complexes obviously do exist, faeries are something separate.

Some even use faeries as a personalised science, by attributing them to natural phenomena such as the opening of flowers. This is not what faeries are.

The Planes of Manifestation

To understand faeries, we begin by understanding the planes of manifestation.
I will divide the planes into these categories:

The pure consciousness of the pre-conceptual divides into 50 Archetypes, each which act as resistances that change the pure energy going through them. From the ethers, these energies go through further resistances which give rise to different functions, which determine forms. There are different parallel Worlds due to the manifestation of different lines of function and form. Descending consciousness will take on function and form according to the plane in which it settles. The same consciousness that becomes a human in our World, if it takes a different function and form by descending into the faerie realm, will become a faerie; or if it stops in the ethers, becomes a Sylph (air), Salamander (fire), Undine (water) or Gnome (earth).

Faeries are not elementals. Faeries exist on a plane parallel to ours. They have similar form to us, but different boundaries. Their plane is that of the Spirit of Nature. This is also created out of the ethers, and inter-penetrates our world. It is what gives rise to life, evolution and magick.

Sylphs are elementals of air. They feed thought and mind, and give light. They appear as very light, ethereal people.

Salamanders are elementals of fire. They strengthen will, produce transformation and transcendence, and purify. They take form from your expectation, often appearing as lizards.

Undines are elementals of water. They produce magnetism and chemistry. They increase the life force and give emotional strength. They appear as a blur of colour, but then take form from your imagination and take on human-like characteristics, often appearing as a mermaid.

Gnomes are elementals of earth. They draw energy from the ethers and release it to matter. They give life and substance. They take form from whoever they meet, so will usually appear human, but stocky and earthy.

Working with the Faeries

Since the faerie world is essentially the spirit of nature, there would be no magick without its existence. Whether we are conscious of them or not, our interaction with the faeries is what gives power to our magick, just as the four elements play an important role in the setting up of magickal space, whatever the tradition. Building a relationship with faeries and working with them consciously will therefore enhance all magick you practice.

In order to work with faeries, it will be necessary to separate them from all the projections one encounters in the ethers, as well as from the elementals. Since the ethers are the crossing point between all the parallel dimensions, we always pass through them on the way to the faerie realm. It is therefore easy to think you are in the faerie realm when you are in fact in the ethers. This is why faeries so often get mixed up with elementals. Most descriptions you will find of faeries are actually describing elementals. 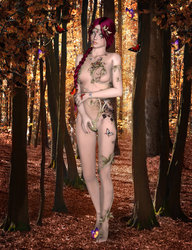 Why us and why faeries?

So why would faeries want to work with us, and what are the benefits? First of all, the interaction causes us both to evolve.Evolution is not always upwards. Whenever any species evolves too efficiently it starts to destroy its own environment. This will lead to its extinction, unless it evolves into a new form. This new form can be either more complex or more primitive, to allow survival. We have to choose complexity if we are to evolve upwards. Faeries have such different boundaries to us that the interaction leads us both into greater complexity, ensuring upward evolution and the development of higher consciousness. Although there are many ways of ensuring this, the path of the faeries leads us most naturally to magickal development.

The first benefit one will notice is greater imagination. Since imagination is our primary tool of creation, strengthening and sharpening it increases our capacity to create. A greatly enhanced imagination is very useful for any kind of magickal practice. From this, clearer desire and expectation follow. Being open to magickal worlds is a sign that our minds are open to possibility. Those who have difficulty believing in faeries generally have less strong belief in magick. The simplest new age tools of visualization can start to produce miraculous results when one’s consciousness is open to the possibilities.

The next benefit, which directly follows on from enhanced imagination, is enhanced dreams. Working with lucid dreaming allows easier spiritual and personal growth, as you are basically working across the threshold between the conscious and unconscious minds. Working magick from the dream state is easy. Visualisations can be done in the dream state, which enter the unconscious easily, producing more regular results. You may also interact with your faerie friends in dream, so your dream time becomes very alive.

Not all faeries are open to this interaction: some faeries don’t even believe in humans. These will not be able to see you, as you are not part of their belief system. So any faeries you interact with are going to be open to work with you, except a few that are hostile to humans because of the damage we do to the natural world. It will be necessary to get protection from these.

Faery Initiations and the Four Cities

Once we start on this path, the faerie elders can initiate us into magick. Such initiations take place in the four cities, of Fineas, Faleas, Murius and Gorias. These are magickal places where worlds overlap. In such places the middle world can overlap with their underworld and upperworld, so one will interact with one’s ancestors as well as higher level magickal beings such as the Dragons and the Shining Ones. Because such overlaps can be disturbing to those not on the magickal path, they tend to get pushed to the edges of their reality. Faeries have a more flexible relationship with time and space, so they move them around. The four cities of initiation are placed at the four quarters of their world; Fineas to the East, Murias to the South, Faleas to the West, and Gorias to the North. One’s training in magick takes one to each of these cities, where different powers are gained.

If one wishes to go through these initiations, it needs to be arranged with he faerie elders first. That is my role in the training. On my courses, the initiations are arranged, so that when you go through the inner journeys, the experiences are very real. You begin by entering the ethers, moving beyond the projections, and crossing over into the faerie realm. You make friends with a faerie, and will then be led through a series of initiations. If you are interested, go to my page on Magick: The faerie and dragon path.

If you have any questions about the faeries or how to work with them, please leave a comment below.

7 thoughts on “Are Faeries Real?”