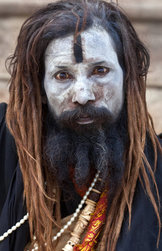 I am often asked what makes certain empowerments so much more powerful than any others. To explain this I need to explain the path of the Aghora.

The Path of the Aghora

Aghora is a very serious tantrik path, following Shiva or Kali. I follow Kali. It is a path involving tantra and necromancy, often to extremes. The two important points I think that contribute to the power of this path are the total absence of inhibition, and the 100 percent giving of oneself to the path.

This removal of inhibition is a theme shared by many powerful traditions. In Vodou, for example, Ghede (deity of sex and death) is extremely crude, sexual and uninhibited, but gives fantastic advice, healing, and the most powerful magick. It is the same in the tantrik path, where one must overcome all shame, inhibition, judgement, and any kind of resistance to the flow of power, as the limited judgements of the human mind are what stand in the way of divine power. The Aghora tends to be rebellious, as political correctness is one of the biggest barriers to truth as well as the free flow of power. It is useful here to take a brief look at how political correctness is a tool for keeping us in limitation, powerlessness and slavery.

You will find every area of human behaviour being controlled by two factors, organized religion and commercialism. I want to pick three important examples that are foremost in opening to shamanic power: sexuality, healing and spirituality.

The common nuclear family and the tendency to serial monogamy is something that has only been the norm for about 200 years. Before that, polyamory was much more common. It is organized religion that controlled sexual expression and then commercialism that locked the present behaviour in place. Just look at how much money is spent on the whole structure of seduction, marriage etc. Spending money has become a normal component of courtship, as if your company isn’t valuable in itself. This already puts everyone into low self esteem. Further, serial monogamy is the slowest learning process you can be in when it comes to relationships, so most people will never find fulfilment.

The natural process you see in animals as well as indigenous people is that sexuality is at first free. You see most animals having several lovers a day, until they eventually find the one they will settle with for life. For humans the learning process is more complex, but each lover teaches you something about yourself. Sometimes you keep several lovers because each one fulfils you in a different way. But eventually you find the one person who fulfils you in every way, and this is more fulfilling that having several fragments to your fulfilment. So you have one person for whom it is worth giving up all the others. This gives that person far more value than sticking with them while your mind is fantasizing about others. You may go through many lovers to reach that point, or, as many spiritual people these days, you may be able to attract a soul mate fast once you have a good base of self knowledge through meditation and reflection.

Serial monogamy slows this process down, partly through the limitation of how many lovers you have, but also because of the jealousy and dishonesty inherent within this system. For a man for example, if you are with one woman, and a really hot girl walks in and you notice her, your partner may ask you what you are thinking about. If you are honest and say you are thinking about that hot girl that just walked in, there is hell to pay. So your feelings get stifled, and you learn not to express yourself. This is stifling to the spirit.

Secondly, jealousy is expected in a relationship. If someone shows interest in your partner and you don’t react, your partner most likely will interpret that as you not caring. This breeds insecurity that weakens you emotionally and spiritually. Before anyone starts to use this as an excuse for betrayal, I must point out that there is absolutely no room for dishonesty in true polyamory. The confusion comes by people trying to be polyamorous without being free of serial monogamy, ie they are really trying to have two or more monogamous relationships, where they are still caught in dishonesty and jealousy.

I mention these things not to encourage promiscuity, but to free you to decide what is best for you, and to loosen up the base chakra from its fixed beliefs so that power can begin to flow. As the Kundalini must rise from the base chakra first, all hang ups and blockages have to go, before the power can rise higher. Of course, none of this fits with expert advice on relationships, because it is not politically correct.

The next area to look at is healing. There is so much pressure for alternatives to fit in with the big machine of modern medicine, that none of the experts dare to tell the truth. There is a similar pattern going on to the way the Goddess was gradually pushed aside in favour of Patriarchy. They couldn’t make people forget the Goddesses completely, so they started to make them consorts of the Gods, and see the Gods as the real power, while gradually diminishing the importance of the Goddesses. The same thing is happening to medicine, by making alternative medicine into complimentary medicine, and then gradually restricting what it is allowed to do or even say.

I went to University, but decided not to go on to do my PhD after being advised by some very knowledgeable healers not to, as it would totally restrict me. All those with PhD’s live in fear of being struck off some important position if they said something to upset their commercial backers. Only by being free of the system can you tell it like it is. Those who create the greatest good are never restricted by the system.

To make one point clear; it is scientifically impossible for a synthetic substance to be as beneficial as a natural substance. There is the basic law of substitution, where a substitute never works as well as the item or substance that was made for the job. For instance, if you put Ford parts in a Ferrari you won’t have the most efficient Ferrari. The only substances that fit in our bodies are natural or nature identical. Something synthesized to reproduce the effect of a natural substance is less efficient and puts the system under strain. But as you can’t patent a natural substance, commercialism requires synthetic medicines to be the norm. 0ur commercial world can only promote second best, as perfection is only provided by nature and by divinity, and is not commercially viable.

Spirituality is also an area that is very much under control. For a long time, organized religion has been part of the political structure. Even the New Age has been engineered by the illuminati to control people’s thinking and stop them rising into real power. The system needs slaves, not free and powerful people. What makes shamanism so powerful, as well as brings it under pressure from the system, is that it is a free spirituality, not confined by any political structure. 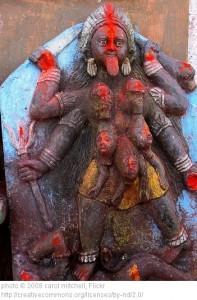 What makes the path of the Aghora even more powerful is the level of dedication put into the path. The intense Sadhanas, the total changing of one’s way of life, the total surrender to Kali, the commitment to overcoming one’s own ego, all allow maximum progress of the spiritual path. Recently I was called to move up to the level of Avadhuta. This is a path of total surrender, where one is willing to sacrifice absolutely everything and anything to Kali. I spent an intense night being called to examine what I would be willing to give up should Kali require it, and ended up with the realization that I would give up anything, even my most precious desires, because the bliss of oneness with Kali was more important. I experienced great transformation during that night, and then the next day was invited to take the initiation to become Avadhuta.

There are basically four kinds of Avadhuta in the world. The Bramhavadhuta, that is chosen from birth, and lives a whole life of total commitment. The Shaivavadhuta, a kind of sannyasin, who chooses to enter a spiritual life, tends to have unkempt hair, dress like a Shaivite and spend their lives in meditation. The Viravadhuta, who tend to be dressed in saffron robes, and the Kulavadhuta, who dress normally, blend in and look like any normal person. For now, I follow the latter path.

It is the freedom from hang-ups and restrictions, and the total commitment and surrender that allow the free flow of spiritual power. Only one who has achieved these two things can pass on the higher dikshas. However, this is not just helpful to advanced tantriks. It means many of the other forms of dikshas are passed on with unsurpassed purity and power. I use some of the tantrik powers in my basic healing methods, and give these empowerments as standard on my courses. One good example is the Shree Yantra empowerment, already described in a previous post.

Then there are the Candali empowerments, which raise the kundalini in safe stages. I give these empowerments remotely, but on my two week intensives, because of the intense healing and teaching that is taking place, can take participants through all levels very fast, to achieve very high states of purification, healing, transformation and enlightenment. The kundalini reaches an intensity that may blister you a little, but always safely, producing great healing.

For those interested in ascending the tantrik path, there are further empowerments that can be continued distantly, such as Ishana Vajra. This has several stages, which awaken tantrik powers in the higher chakras, allowing the use of basic Siddhis for manifestation, attracting wealth, seduction, mind control and protection, basically putting you in charge of your life. See my new Aghora Empowerments for details of empowerments I am currently offering. I will continue to add higher empowerments gradually for serious tantriks.

One thought on “Aghora Tantrik Empowerments”